While I’ve noticed construction workers have gotten more polite the older I get, I can’t say the same for all male CEO’s I’ve worked with.  There may not be Canadian Club drinking or Lucky Strike smoking going on in the office, but Mad Men still exist in present day corporate America.

I was in Vegas at a business convention the first time one of my boss’s asked me to have sex (yes, he bluntly asked me “Are we gonna have sex or what?”) I was stunned, disgusted and at the same time not surprised.  I say stunned because it hit me like a bebe gun but deep down not surprised because he creeped me out on a previous business trip by checking out my body just before going into the hotel pool.  When I told him no, he flatly asked “why not?” as if he asked me to type a letter for him and I refused.  I told him the obvious – you’re married, I have a boyfriend, you’re my boss.  I didn’t tell him the rest of my thoughts – you’re 20 years older than me and you’re gross.  Like a lion pursuing his prey, he didn’t give up easily.  He tried a different tactic though – I had left my briefcase with him earlier and so I should go up to his room to get it (and no, I wasn’t doing any work later that night).  I told him I could get it in the morning and called it a night.

I didn’t tell his wife and there was no one to report him to – he was the CEO.  I didn’t get fired so I was just stuck with living the cliche what happens in Vegas, stays in Vegas. He later moved on to a more willing victim – his secretary – who as a single mom of 3 suddenly became the owner of a new Cadillac and the winner of a trip to Hawaii.  My only redress is the IRS investigated him for tax fraud and sentenced him to federal prison.  That’ll do me. 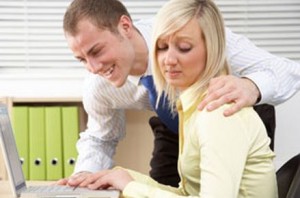 More than ten years later,  I took a job as an assistant to a CEO.  No longer a hot young thang in my 30’s, the idea of my boss having a case of the touchy-feelys didn’t cross my mind.  Even his wife interviewed me which I assumed was more to assess my not a sexy blonde in her 20’s attributes.  I was a safe bet.

While not as blunt (at first) as the previous perv, his arrogance was equally overwhelming. My duties included organizing office supplies in storage closets and on the occasions he joined me to go over the inventory, I sensed all was not right in the state of office-dom. Slight inappropriate touching happened – and I tried to pretend it was not an overture to all out creepiness.  I am disappointed in myself that I questioned my own intuition.  I had plans to leave the job but didn’t want to lose it before I was ready.  I finally did quit and on that day he offered to take me to lunch – I assumed a public place was safe.  But words cannot be seen and when he asked to kiss me, it reaffirmed my decision to leave (I said no, by the way).

I feel like I was thrown into a time machine and ended up the 1950’s after my experiences.  These two bozos know how they are supposed to behave – they are just too arrogant to care.  And while both are married and know it’s wrong, they just want to push the boundaries like rebellious teenage boys.  Maybe they’re bored, maybe they have an over the top sense of entitlement – I do know they have absolutely no respect for women.

Aaaaah, the list of blog-worthy rocks of wisdom grows as the weeks pass and I become even wiser.  I’m really trying my best to impart my wisdom on the younger generation of the world so they know what they’re in for.

2.  If you’re a single mom and none of the other moms at your kid’s school or daycare want to be your friend, it’s because they’re afraid their husbands will want to sleep with you.  When I first put my daughter into preschool, I noticed a camaraderie among the other moms that was not extended to me.  I was used to people not liking me from elementary school and summer camp so I figured it was my personality.  Then one year when I was supposed to go back to my home state to visit friends and family, I had a hard time getting one of my married girlfriends to let me stay at their house.  I felt horrible.  My aunt informed me they were worried about allowing a single woman to sleep over because their husbands might want to sneak into the guest bedroom at night.  I was stunned.  I applied this knowledge to the married moms club at preschool.  It wasn’t me! It was their own insecurities!  At least that is what I told myself.

3.  It’s REALLY hard to give head with cotton mouth.  You’d think I would have learned this years ago since I’ve been smoking weed since high school.  Maybe I did know it back then but just forgot because I was stoned.  Anyway, with the strong edibles in Colorado, it is nearly impossible to give good head when you are practically tripping on weed.  You really can’t do much with your mouth when you lack saliva.  Yes, keep a glass of water nearby, but it’s honestly not gonna do much good.

4.  You know you have a really good friend when you can pee in his or her house with the door open.  I’m not saying you have to have full on deep conversations while the other person is standing in the doorway and you’re on the toilet, but you love talking to each other so much that you keep the door open so you don’t have any interruptions.  Going to the bathroom should not be a barrier to good conversation.  At least not with a bestie.

5.  Wine is very important. You’re thinking, I already know this.  Yea, but as you get older you might be in a restaurant drinking your wine and realize..hmmm… I’m going to be driving and I’m getting buzzed.  I really want to finish this glass but I don’t want to get into an accident or worse still, get a DUI.  In addition, this glass of wine just cost me as much as an entire bottle in a liquor store.  It’s at that moment you are about to ask the waitress for a to-go cup for your wine.  You’d do it for your coffee.  It makes total sense.  Then you realize that might seem weird and you leave the restaurant or bar, glancing longingly at the glass on the table still containing the ruby red goodness (or golden glow if you like white).  I’m not there yet, but there will be a day when I will have the chutzpah to ask for the to-go wine cup.  Like how my Jewish grandmother stashed condiments in her purse before leaving a restaurant.

I do hope you have gained insight into life, liberty and the pursuit of happiness from my rocks of wisdom.  By the way, I decided to not title this post Confession #13 because according to search engine gurus, a headline with the words life lessons gets more views.