I’ve waited a long time to write about being a single mother by choice.  Yea, my web series, Mile High Nancy, is about a single mother by choice but I do take fictional creative liberties there.  I also joked about it while doing stand up comedy, saying my eggs were rotting,  referring to the turkey baster method of insemination and how I found the sperm on Craigslist because I was too cheap to buy it from a sperm bank. 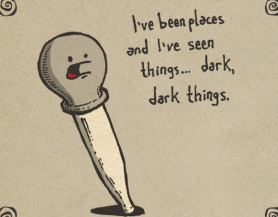 The truth is, I did really find the sperm donor through a Craigslist ad I posted.  I’m not the only woman to do this as fucked up as it seems to me now.  The difference between me and I’m sure all the other desperate over 35 year old women who put up ads is that I agreed to let the donor be a part of my child’s life.  Like a real father.  I was too scared to be a single mother by choice on my own for two reasons – psychologically and financially.  While I support women being SMC’s wholeheartedly, I realized soon after my daughter was born that  if your mindset and bank account are not firmly established, working towards those goals is better than getting knocked up by a vial of sperm from guy on Craigslist.

I won’t get into all the details leading up to the actual birth but as time went on and my uterus grew I started wondering about the mental health of this guy.  By the fifth month I could hardly breathe with the baby pushing on my diaphragm but I wonder if part of the suffocation stemmed from a feeling of dread as I got to know him better.  I did wait more than a year of getting to know him before actually going through with it.  But the first year was like getting to know Dr Jekyll and after getting pregnant it was like getting to know Mr. Hyde.  Control freak and passive aggressive are putting it mildly.

I actually lived with him for about three months – half while pregnant and the other half after she was born.  I left (more like I escaped) when she was six weeks old because I couldn’t deal with his rules and regulations and his almost violent outbursts.  The plan was I would live there for one year but I couldn’t deal with his control issues.  Before she was born he told me he would pay for my expenses while I lived with him – after she was born he wanted an itemized list of where the money went.

After I moved out, we went through a custody battle.  We were never married but got to experience the hell of divorce.  I felt like I was sinking – I was in the ocean holding onto a floating raft with my baby girl in one hand and he was standing on the raft stomping on the hand that was holding on for dear life.  I was scared shitless.

During the past several years he’s used his money/child support as a tool to manipulate and bully me.  I’m in a different situation and place in my life now and so he can’t dangle that carrot anymore.

I’m not writing this to demonize him believe it or not. I’m writing this because one of the hardest lessons I’ve learned is that when you rely on someone for financial reasons you give up your freedom.  I relied on my father for a long time to help me out financially as well and then when that ship sailed I jumped onto something that looked like a luxury cruise line and ended up being the Titanic.

I do take responsibility for not either believing in myself to do this fully on my own or simply waiting and taking the steps to be financially independent.  And if I did make the decision to do it 100% alone I would have preferred to live in a ditch with my child than deal with being strong-armed and harassed.  I admit making a decent living before getting pregnant would probably have been the better choice.

This post is only a snippet of the fear, depression, and general rollercoaster of emotions I rode for a few years after having her (and still do for a variety of other reasons).  As cliche as this sounds, my hope is my daughter grows up to be independent and finds a loving relationship and partner but does not become dependent on anyone.  I used to joke with her it’s just as easy to love a rich man as it is a poor one (yes, I’m turning into my mother but that’s another post), but now I tell her to become a petroleum engineer.. or any kind of engineer.  Of course I would love to see her marry a multi-millionaire.  But if he didn’t treat her well, I would love her to be able to walk away from him with ease and never look back.

One thought on “Confession #19”